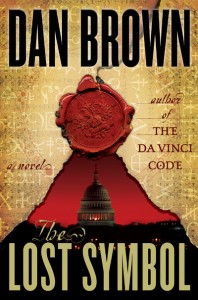 The weight of our soul? Now that is an interesting question and the most mind flexing idea in Dan Brown’s, The Lost Symbol. I found myself holding my breath until the elaborate precise scale described, had locked in the final weight of a dead body after the soul had left it. An intriguing thought.

I am a great Dan Brown fan and I have and will read every word he writes. But The Lost Symbol was a bit of a let down. Too many words describing even the smallest movement of the characters left me unable to hate, love or empathize with their problems. And the wandering in one door, underground and then into the streets of Washington DC had me searching for a map to orient myself and I lived in the DC area for five years.

Professor Robert Langdon was the only character genuine to me. And that is probably because once you have a great actor like Tom Hanks (The Da Vinci Code) in your head, he stays.

TMF (too many facts) made me feel I would fail the final exam because I hadn’t taken notes during my reading. I love history and mingling fact with fiction certainly makes the fiction more believable but this was OTT (over the top).

In spite of all that I can’t wait to read what Dan Brown comes up with next! Perhaps he will postulate a method for transference of a soul. Wouldn’t it be great to salt everyone’s soul with a pinch of Mother Teresa, Gandhi or Martin Luther King. What an amazing world this would be?