For fans of Wayne, Matt, Richard and the crew.  Yes, they are off on another adventure.  This time uncovering a deeper conspiracy right here under our noses (or should I say feet) in the US.  And if you ask why it took so long, well, writing “on the edge” of reality, we had to scrap the idea of explaining where the anthrax letters originated when the accused USAMRIID scientist, Dr. Bruce Ivins, committed suicide and the FBI declared “case closed.” Don’t worry, like the National Academy of Sciences, we don’t think that case is really closed, we just found a new trail (and yes there will be caves for those who remember Wayne’s previous exploits) and even a bit of the mystical when the sequel resurfaces.  We haven’t decided on a title yet…Any ideas?  We may have a contest.  Let us know! 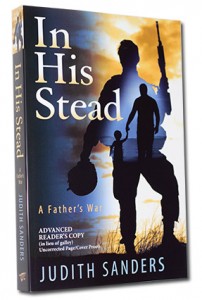 Cmashlovestoread.com writes “As lovers of books, don’t you wish there was some way, we had the time and could read each and every book on our TBR and Wish lists?  I know I do.  And this is one of those books.  When Jaime from Media Connect/Finn Partners contacted me, I knew I had to share this with all of you.”

Here’s what else she has to say:

“In His Stead explores the tension, devastation, strength, and love of service families during wartime through the story of one man, Retired Army Ranger Thomas Lane, as he attempts to make the greatest sacrifice for his son.

Lane once burned for the taste of gunpowder and thrill of the battle. But as he struggles to cope with his own PTSD and the death of his eldest son who was killed by an IED in Afghanistan, Lane learns that the price of war is far too dear. Now the National Guard is calling on Lane’s youngest son to serve. Consumed with sorrow, Lane knows he will do anything to save his child—even if it means going in his place.

In His Stead follows the tumultuous battle of Thomas Lane as he navigates the United States Army, its JAG corps, a vengeful officer, the very son he is desperate to save, and his own wife, who has the Solomon like choice of losing either a husband or a son. Capturing the essence of family life in wartime—the good, the bad, and the hopeful—In His Stead explores what it means to be a father and a man.”